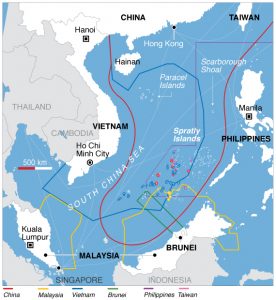 The Permanent Court of Arbitration in The Hague, the Netherlands, issued its award regarding the dispute between the People’s Republic of China and the Philippines over territorial claims in the South China Sea.

The Permanent Court of Arbitration (PCA) is an intergovernmental organization established by the 1899 Hague Convention on the Pacific Settlement of International Disputes. The PCA has 121 Member States. Headquartered at the Peace Palace in The Hague, the Netherlands, the PCA facilitates arbitration, conciliation, fact-finding, and other dispute resolution proceedings among various combinations of States, State entities, intergovernmental organizations, and private parties.