The first step in moving the law library’s collection was to measure the shelf space in the new building, shelf by shelf. In theory, the blueprints showed the total amount of shelf space. However, our library movers’ motto is “trust, but verify.” 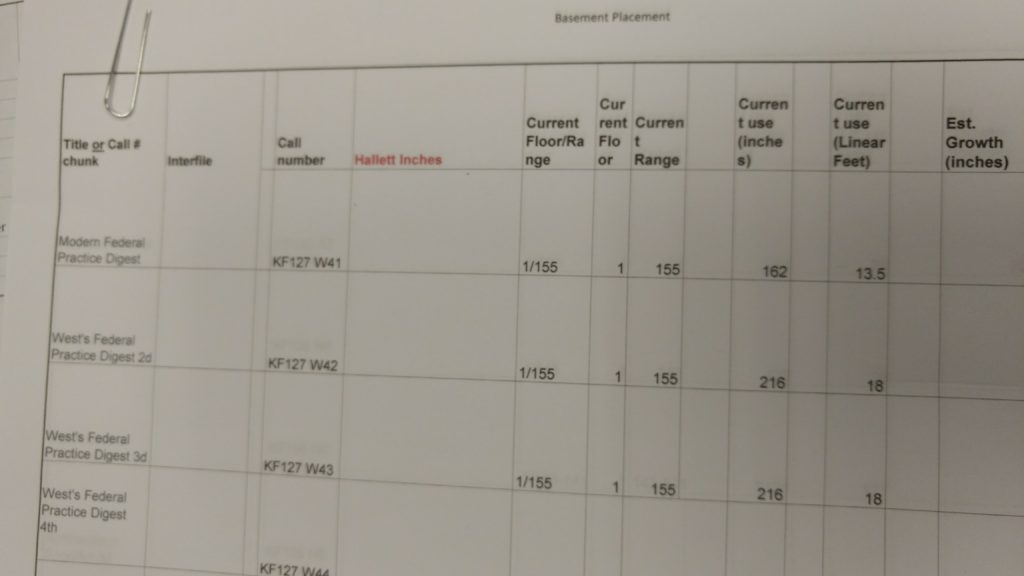 spreadsheet used by the movers

In verifying how much shelf space there was in the new basement, the movers discovered that a few bookshelves were 29 inches wide, rather than the standard 35 inches. The builders had to add extra support posts in the basement, which hadn’t been called for by the blueprints, and the shelving had to be reduced slightly to accommodate the posts. Discovering this discrepancy in advance and being able to move some columns of numbers in the move-planning process, rather than discovering it at a later time when it would slow down the physical process of moving the books, is the benefit of first verifying the measurements of the new shelf space. 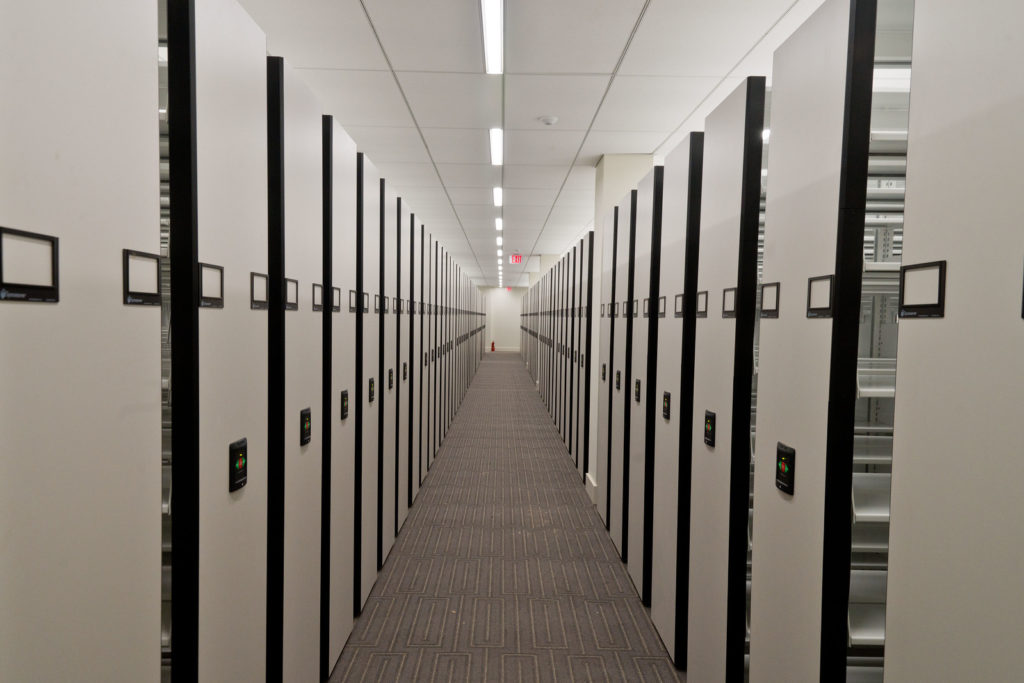 compact shelving in the new library’s basement; a support pillar is visible on the right          USC Photo

The next step is to measure the width of the books in the library’s collection and plot their new location shelf-by-shelf. 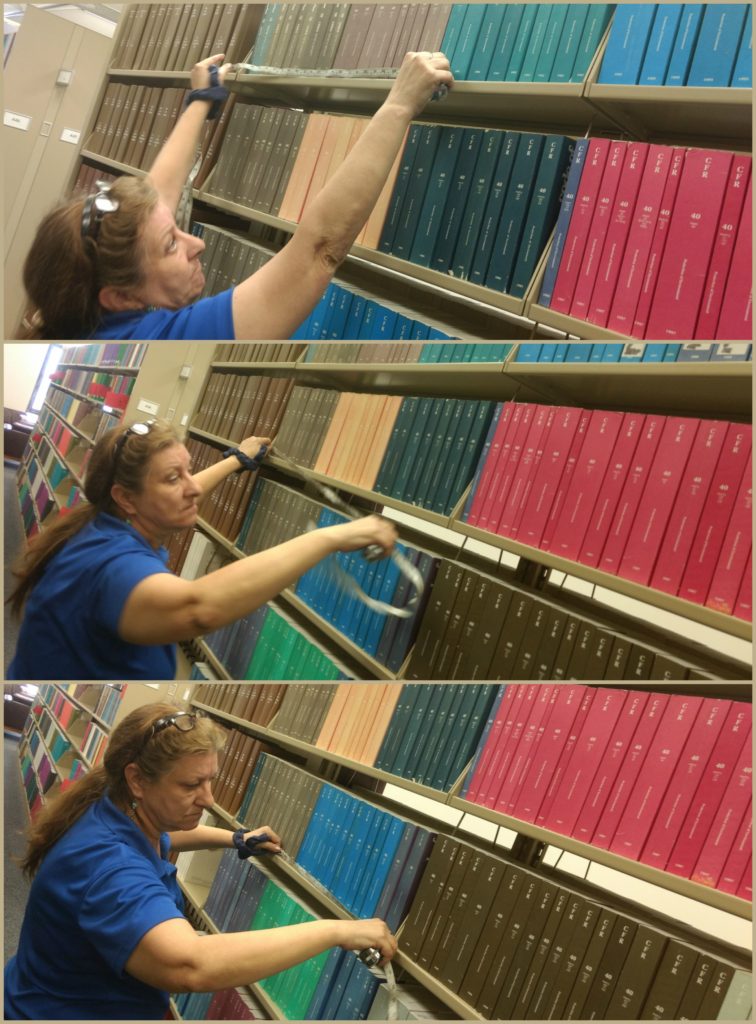 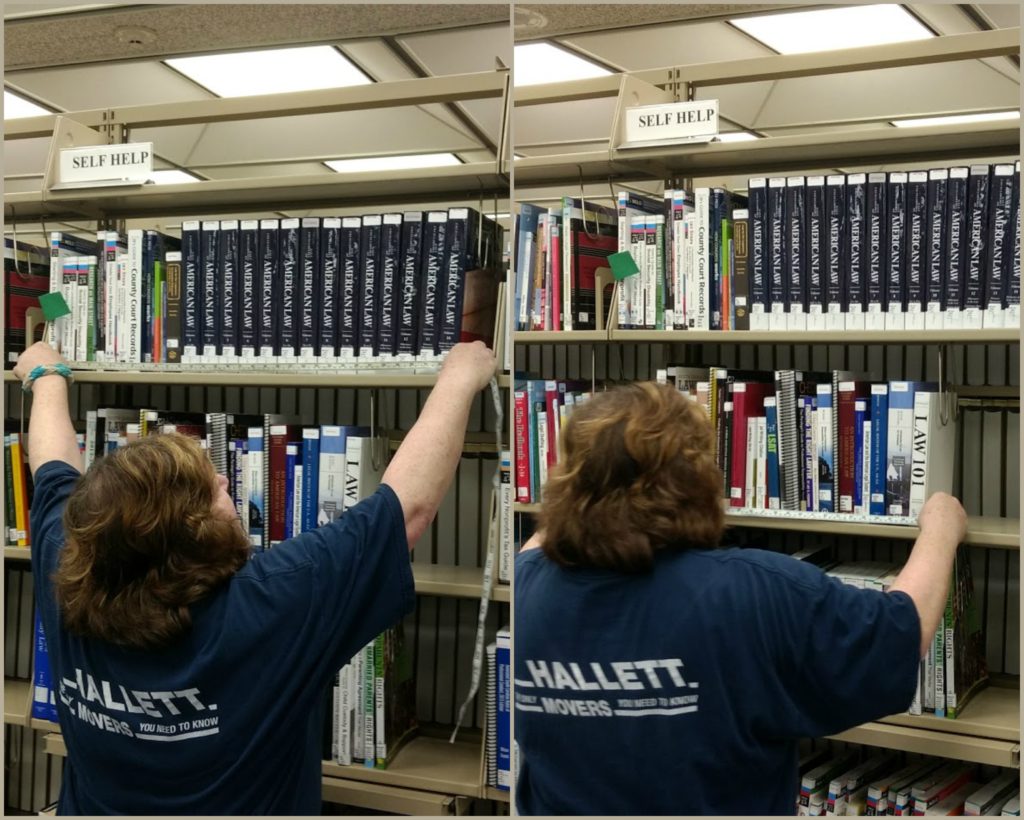 Most books cannot be placed in the same location where they were in the old building. The print collection was (very roughly speaking) equally spread over the four floors of the library at 701 South Main. However, at 1525 Senate, 70% of the print collection will be in the basement’s compact shelving, and the remaining 30% will be distributed among the first, second, and third floors of the new library. 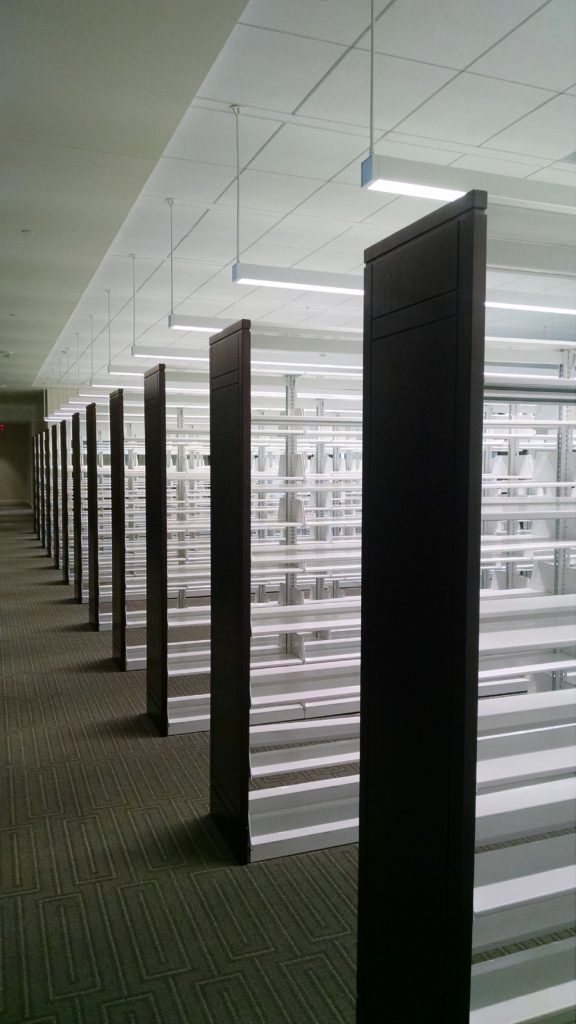 The law librarians have already done the decisionmaking about which sets of materials will be in the basement (case reporters and law journals, among others), and which will remain more easily accessed on upper floors (South Carolina Code of Laws, South Carolina Bar publications, and study aids on the first floor, for example). 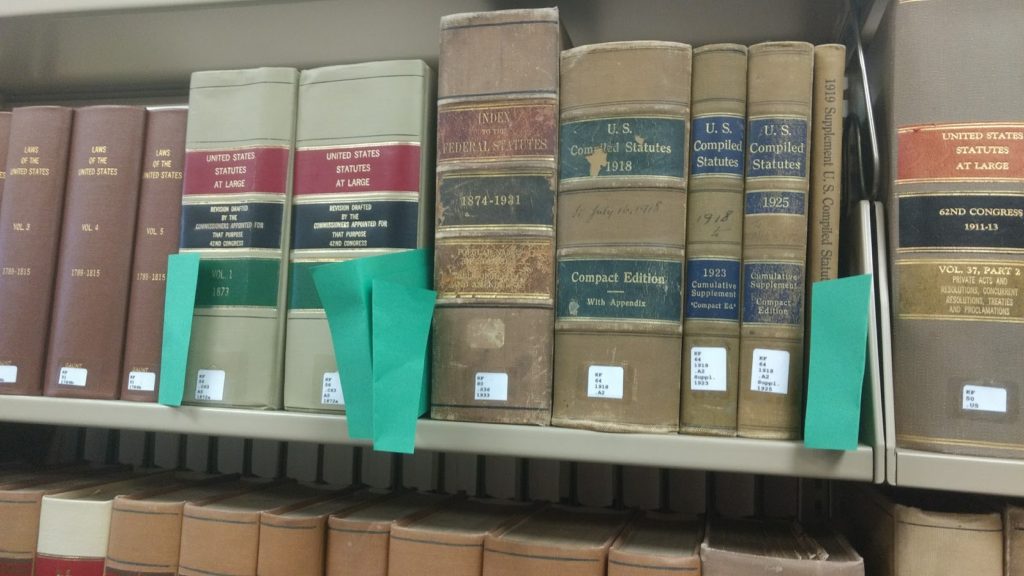 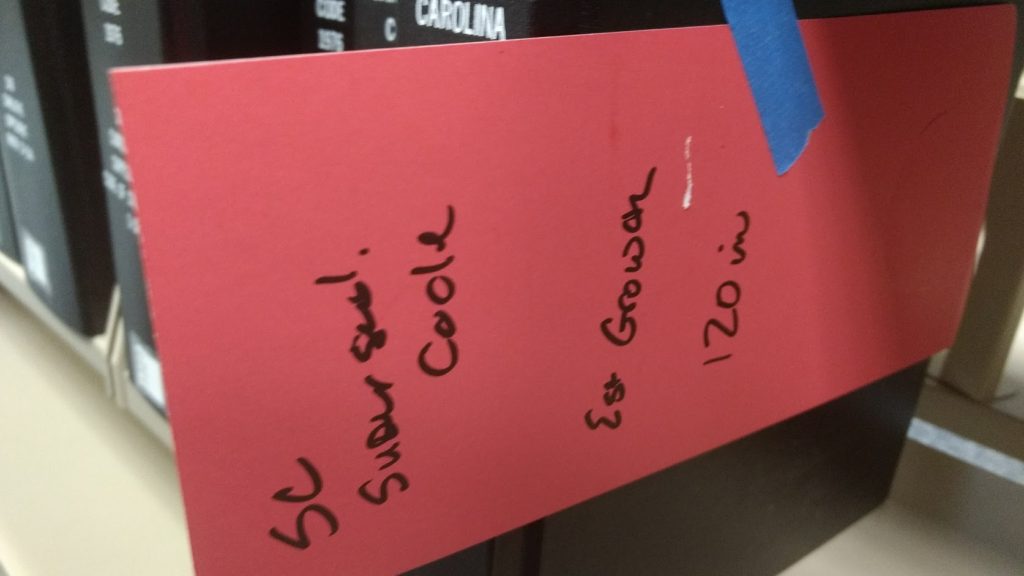 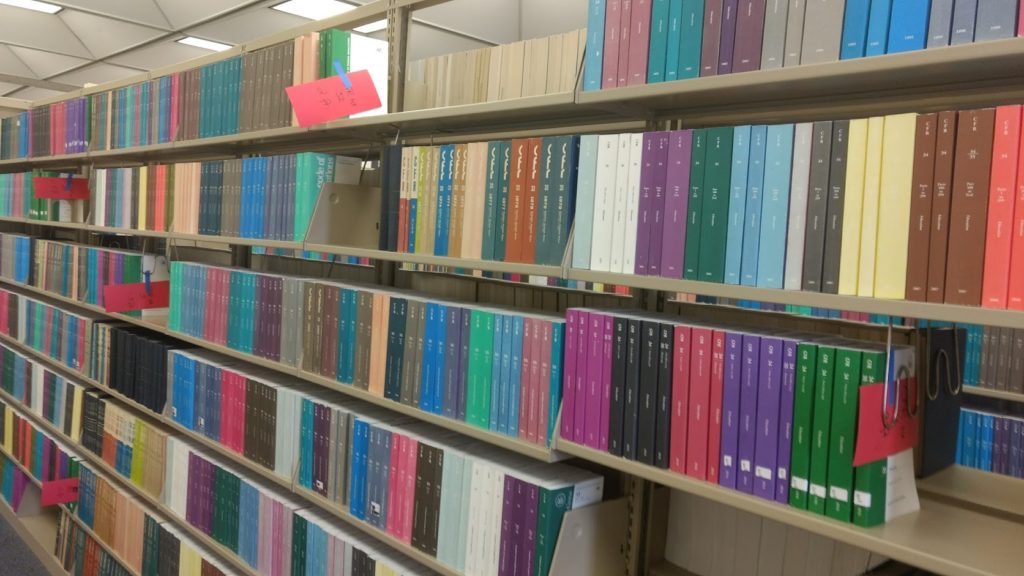 Each title of the Code of Federal Regulations is updated annually, and the library stores the superseded versions of each title together. Red tags allow space between the latest version of one title and the earliest version of the next title.

After measuring, the next step is to tag the books in their old location along with their intended shelves in the new location, shelf by shelf. The tags are color-coded by floor in the new building: basement, first, second and third.

measurements plotted to locations; duplicate tags in the lower left

Duplicate tags are used, meaning that there are two stickers with identical color and number: one red 1000 that goes on a book in the current space, and another red 1000 that goes on a shelf in the in the new building. As the movers load up the books, they make sure each shelf-load begins with a tag, which should then match up with the tag on the shelf when they unload. That way, any accidental mixup in book location should be easy to spot in an instant. 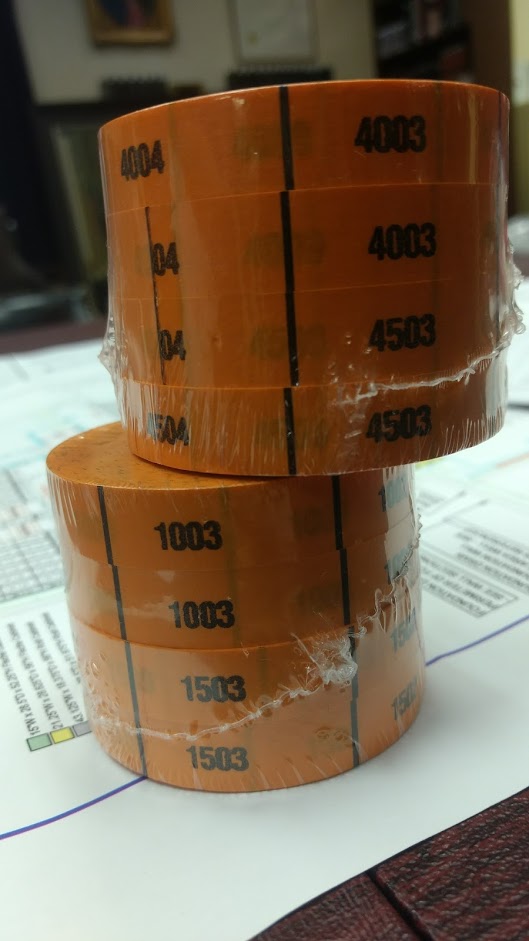 This tag shows that instead of being in the middle of a shelf, as it was in the old building, volume 38 will now be the first book on a shelf. Movers will place it in the new building on the shelf that has been tagged with a green 1457. The books to the right of it will of course be placed to the right of it, until the green 1458 tag is reached and the next shelf begins. 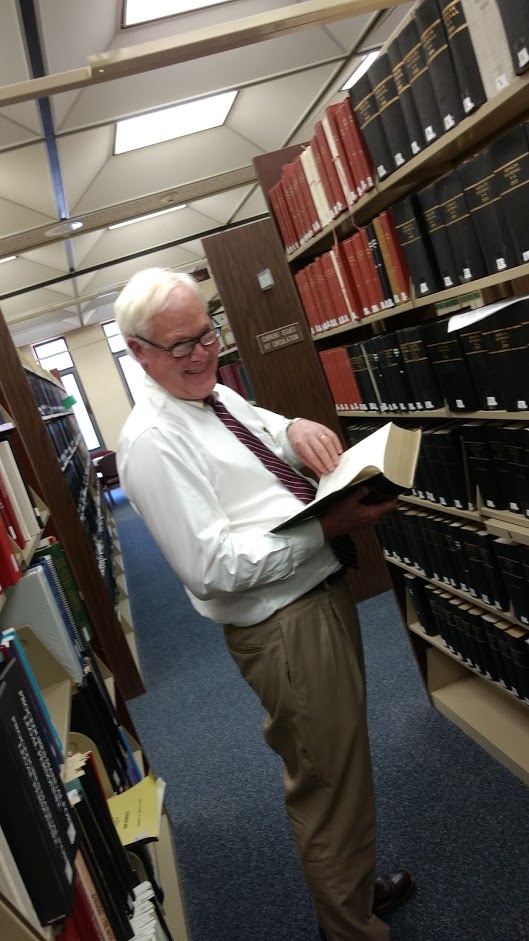 Dean Robert M. Wilcox made a last-chance library run before we closed for the book move. 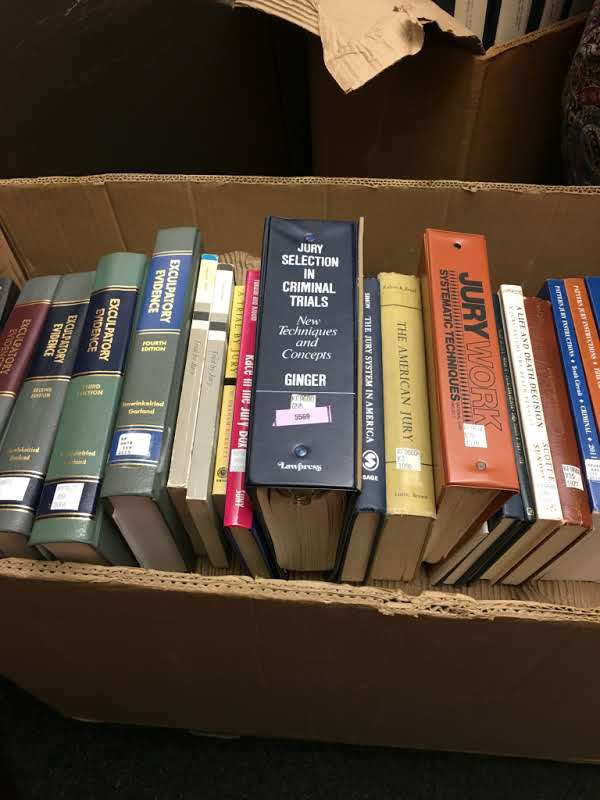 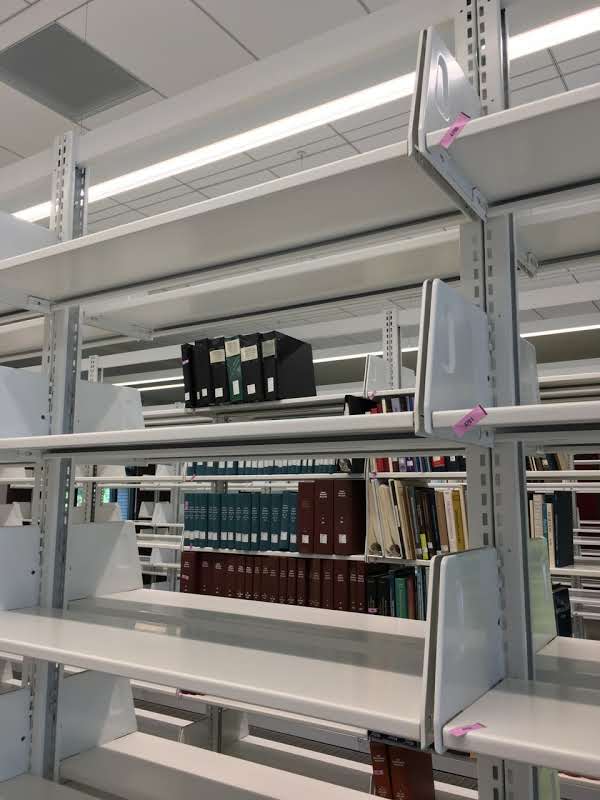 Some books have already arrived in the new building and are being placed on the tagged shelves.       Photo: Candle Wester

Previous posts in How to Move a Law Library: