The Library of Congress offers the Congressional Research Service—hundreds of policy analysts, attorneys and information professionals who provide in-depth analysis on issues facing Congress. Immediately following the 2000 presidential election, there was uncertainty as to which candidate had won Florida’s 25 electoral votes because the popular vote in that state was close, and a recount process was underway. In response to questions about how this could affect the process for officially electing the President, the Congressional Research Service wrote a memo entitled Overview of Electoral College Procedure and the Role of Congress.

The popular vote in a presidential election does not directly elect the president. Voting results in the selection of electors who pledge to vote for a particular candidate for president. A faithless elector is one who does not cast the vote as pledged. South Carolina Code Section 7-19-80 provides that it is a crime for an elector from this state to be a faithless elector.

There are two states—Nebraska and Maine—whose electoral votes are not apportioned according to the winner-take-all system. The Nebraska legislature defeated a bill in April that would have ended the practice of apportioning its electors based on the popular vote in each congressional district. Maine’s law provides for two at-large electors and one elector from each congressional district.

Click here to see resources in the Coleman Karesh Law Library relating to the Electoral College. 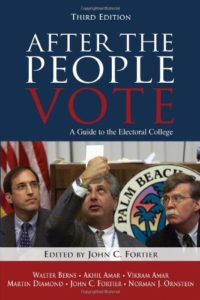