The guest post below is by 2L Jeff Harris. If you’ve visited an amazing library that you’d like to guest-blog about, let Professor Ross know.

Sometimes the coolest places you go are the places you aren’t supposed to.

Back in 2012 I studied abroad throughout the British Isles with Furman University’s theatre program.  Naturally, the program involves gaining a deep understanding of culture in the Isles, so everywhere we went we visited museums and cultural exhibits: traditional performances like the York Mystery Cycle and the Scottish Military tattoo, culturally significant museums such as the British Museum in London and the Titanic museums in both Belfast and Cork, and regional landmarks and heritage sites like Arthur’s Seat in Edinburgh and the Blarney Stone at Blarney Castle in Blarney, Ireland.  Most of these visits went as planned, and as scheduled; some did not. 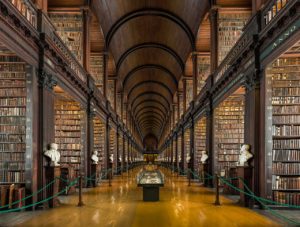 One such visit was to the library at Trinity College Dublin.  We came to see the Book of Kells, an illuminated manuscript gospel book, containing the four gospels of the new testament.  Created in Ireland circa 800 AD, the manuscript is a collective work of Columban monks throughout the Isles.  It is lavishly decorated, detailed, and vibrant; its insular style of art combines traditional Christian imagery with Celtic knots, tying together the then young religion with the ancient cultures of the Isles.  It is exactly the thing we came to see at the library; on our way out of the exhibit, however, my friend Madilene struck up friendly conversation with a security guard. 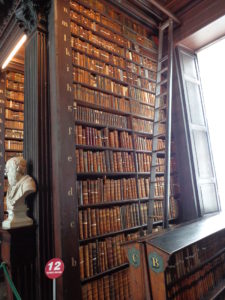 The guard spoke of his enthusiasm for a new exhibit opening soon:  Dr. Ernest Walton’s Nobel Prize in Physics, earned for first splitting the nucleus of an atom.  Madilene expressed her disappointment that we would already have left Dublin by the time the exhibit opened, and the guard, either charmed by the friendly, bubbly American girl, or too devoted a historian to let the enthusiasm of others be quashed by disappointment and poor timing, held a finger to his lips and raised his keys. 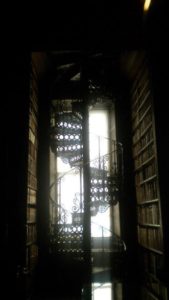 The exhibit was located in Trinity College’s famous Long Room Library, in which are housed Trinity College’s most ancient tomes.  Aesthetically, the Long Room is the stuff of fiction, movies and imagination.  As we emerged from the staircase in the center of the room, we were immediately enveloped in an aura of tradition and knowledge; deep, dark wood encased the library, rows of book cases reach from the floor to the balcony, from the balcony to the arching ceiling.  Each bookcase is accompanied by an antique wooden ladder which soars across the aged volumes on rails to help researchers find the wisdom they seek.  Ornate, wrought iron, spiral staircases twist their way up to the balcony level. 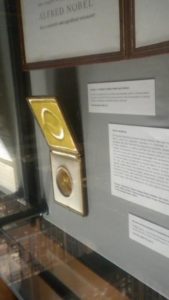 The prize itself was located at the end of the room, arranged with many of Dr. Walton’s papers in a glass display case.  The prestige of the prize, and the power of its world-altering accomplishment, was only amplified by the old-world aura of the Long Room.  Its shelves stand frozen in time, accessible only by meticulous and cautious researchers clad in white gloves, almost more concerned about preserving the books as with learning their contents.  It is a place that demands respect and reverence, and projects that demand onto its displays.

The Long Room is the most breathtaking library I’ve ever visited; its age, prestige, and accumulated wisdom hang in the air, and its sheer physical beauty has few peers.  So, if you ever find yourself in Dublin, don’t forget to put down that Guinness and head to the library; you won’t regret it.