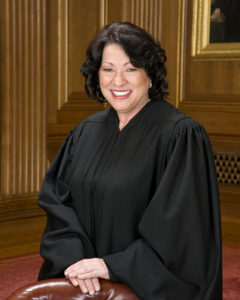 When current Supreme Court Justice Sonia Sotomayor was a district court judge in the Southern District of New York, she wrote the ruling (later upheld in the Second Circuit Court of Appeals) that helped end the 1994-95 baseball strike.

Judge Sotomayor wrote: “This strike… is about more than just whether the Players and Owners will resolve their differences. It is also about how the principles embodied by federal labor law operate. In a very real and immediate way, this strike has placed the entire concept of collective bargaining on trial. It is critical, therefore, that the Board ensure that the spirit and letter of federal labor law be scrupulously followed.” Silverman at 259. The Court issued an injunction, ordering the Owners to bargain in good faith with the Players, and the 1995 baseball season eventually got underway.