Exhibit: Documents of Richard T. Greener, an Early African-American Lawyer in South Carolina is on display in the law library, now through March 30.

Richard Theodore Greener graduated from USC Law School in 1876. His diploma, written in Latin, with a red wax seal, is on exhibit.

Greener was admitted to the South Carolina Bar that same year. His law license signed by the justices of the SC Supreme Court (only three of them at the time), is also on exhibit. 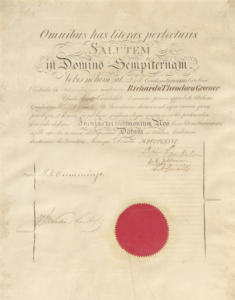 Greener was the first African-American professor at USC. A photo of his living quarters is on exhibit. If you’ve been to the USC Horseshoe, it will look familiar.

Among other subjects, he taught constitutional history. What would that have been like, in the 1870’s, to learn from him about a constitution so recently amended? An exam he gave on the constitution is on exhibit, and it does not look easy.

Greener resigned from the university in 1877, when the Reconstruction Era ended, and USC became an all-white institution until desegregation in 1963. His handwritten letter of resignation, a model of 19th century professionalism, is on exhibit.

We are so fortunate that the university has these documents. The diploma and law license were discovered when construction workers in Chicago (where Greener lived toward the end of his life) were clearing out a vacant house before demolition. One worker was curious enough to look in an abandoned steamer trunk, and thought the documents inside might have some value. Indeed, Greener’s law diploma in particular is the “holy grail of university history” according to university archivist Elizabeth West. Prior to its discovery, the university did not have a diploma from any of the African-American graduates during Reconstruction.

Ask at the law library’s Circulation Desk (enter the law school on Gervais Street between Bull and Pickens; once inside, turn right) for your chance to see these documents before they are returned to the university’s vault March 30.

This exhibit is free and open to the public.